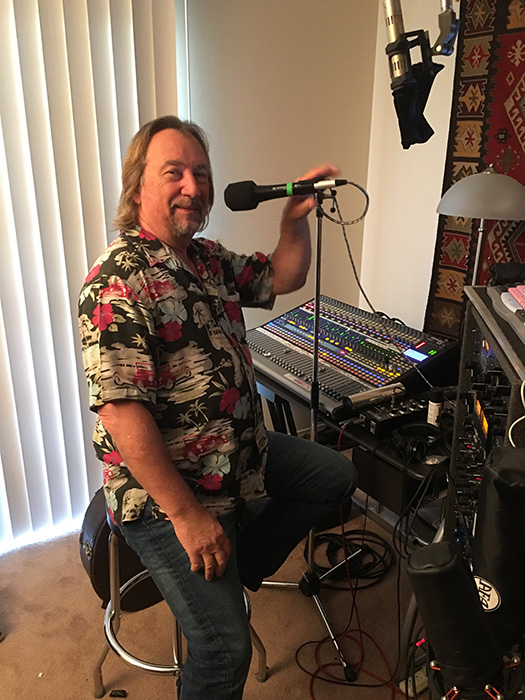 Unless you were born yesterday—and maybe even then—you’re familiar with Jim Messina’s vocals, guitar work, songwriting, and production wizardry. Although best known for Loggins and Messina, Poco, Buffalo Springfield, and his solo efforts, he has worked with countless artists.

Recently, Messina (www.jimmessina.com) released a new live album, In the Groove, showcasing his songs and current band and featuring former Poco bandmate and pedal steel legend Rusty Young. In addition to releasing In the Groove as a vinyl LP, Messina and Wolff offer the album as WAV and MP3 files on an 8 GB USB flash card. The “Access All” USB card also includes video, cover art, photos, liner notes, and even an encore song that didn’t fit on the LP.

“We used the StudioLive 312AIs for front-line wedges, and we had absolutely no feedback,” recalls Wolff. “That was important because we were doing a live video broadcast as well as tracking for the new live album, In the Groove.” “I don’t think we even EQ’d the monitors,” adds Messina. “I remember at soundcheck saying ‘don’t touch my monitor, it’s fine, just leave it alone!’”

In Messina’s experience, many house stage monitoring systems, while loud, aren’t “present” and clean enough. “The PreSonus speakers made a big difference because they have enough clean power for me to hear my voice and the harmonies,” he contends. “If I don’t hear well, I tend to sing harder and go sharp. But I heard the StudioLive monitors very well at the Clark Center, even though the stage acoustics are no better than average.”

Messina likes the StudioLive AI sound so much, he bought in. “I have a pair of StudioLive 328AIs and StudioLive 18sAI subwoofers for my main FOH system when we play small rooms for 200 to 300 people,” he explains, “and it works out tremendously well. We have the 328AIs mounted atop the subwoofers, using the optional sub pole. We use the speakers with the StudioLive 32.4.2AI, and at some shows we mixed the monitors onstage with the iPad, instead of at the console.”

The StudioLive 32.4.2AI has proven a good choice in multiple ways. “I am thrilled with the console,” Messina enthuses. “It’s small and lightweight, and you can afford to buy it and take it with you. We like the preamps, the EQ is right, and you can assign things just by pushing a button. Recording from the mixer with Capture is a no-brainer: You plug in a FireWire cable, press Record, and go. The StudioLive lets us record the way we want to, and the tracks for the live album sound fantastic!”

“I don’t have to think about running the console,” Wolff avers. “It’s the closest thing to mixing with an analog mixer. That is extremely important; when something happens, and all hell breaks loose, I can’t sit there and flip through software pages to make an adjustment. With the StudioLive, everything is right where I can grab it quickly. I was able to use the console to mix FOH, a front-row mix, a sidefill mix, a mono mix, tracking for the record, and a mix for the live stream—all at once. My best tip? Don’t buy a stupid console that can’t do that!”

As good as the recorded tracks were, Messina and Wolff needed to fix a few clams. The challenge was to do it seamlessly. “I took the StudioLive console into my studio,” Messina recalls. “My studio system is hardwired, with an analog console and an audio interface for the computer. So we patched the StudioLive console’s DB25 direct outs into the analog console, straight into the tracks we had recorded live, and we were able to punch in and fix them.

“For instance, in ‘Same Old Wine,’ I had missed one note in my solo, and I played the only note you’re not supposed to play. It had to be fixed. We had close-miked the amps, so there was no bleed. I set up my amps in the studio exactly the way they were onstage, used the same mics, plugged into the same channels, used the StudioLive’s scene recall to reload the settings from the Clark Center show, and punched in. The bad note was replaced, and you can’t tell. We also fixed a couple notes where I sang a little flat or sharp or sang the wrong word.”

Messina also uses his StudioLive AI console at rehearsals. “It’s great for full rehearsals,” he insists. “We’ve even recorded rehearsals with it so we can check what we’re playing. Having that flexibility is awesome! The StudioLive AI lets you mix and record without thinking about the equipment. I made the decision to buy the StudioLive 32.4.2AI, and I’ve never regretted it!”