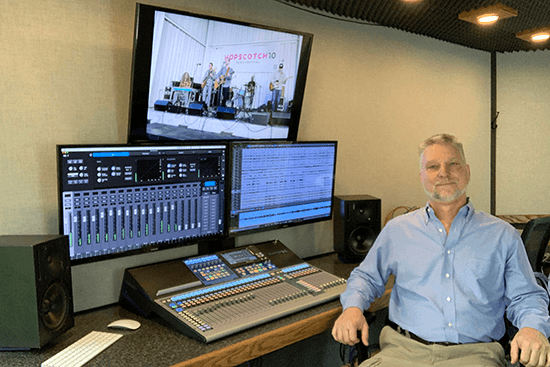 Jeff Anderson is the owner of Mobile Tech Space, Inc. In addition to booking and operating the Mobile Tech Space Trailer, Anderson also works with outside clients as a remote broadcast audio/comms technician. Being a very ‘hands-on’ person, Anderson knows first-hand the challenges of the work and the importance of having reliable, feature-rich equipment. Hence, for audio mixing, PreSonus StudioLive Series III mixing consoles are central to his business. He discussed his fondness for the PreSonus consoles and his reasons for using them.

“Our Mobile Tech Space Trailer was recently used by ESPN as a VIZ Graphics and EVS record/playback room alongside their remote broadcast truck,” Anderson reports. “After that, it was used at the ACC Tournament as an AVID Video Editing Room by Raycom Sports to support live broadcasts. Most recently, it was used by WUNC Music, part of North Carolina’s statewide NPR network, to provide multitrack and live streaming support for the Halfway to Hopscotch Music festival in Raleigh, NC. The walls and ceilings of the trailer have acoustic treatments, making the space ideal for audio projects. The Mobile Tech Space Trailer has a StudioLive 32. The consoles that were used on the Hopscotch Music Festival project are the StudioLive 32 and a StudioLive 16.”

When queried about those attributes that make the PreSonus StudioLive Series III consoles a good match for his business, Anderson pointed to several key features, key among them AVB (Audio Video Bridging). “The ability to consolidate signals and share content between consoles using tactical CAT6 is key for us,” he explained. “At the Hopscotch Music Festival, for example, a StudioLive 16 served as a live streaming console while a StudioLive 32 handled multitrack recording in another location 250 feet away. We’re currently experimenting with ways to extend the AVB network over single-mode fiber, because the cable runs in some venues can be several thousand feet.”

“The ability to control the consoles remotely using software is another key feature,” Anderson added. “For example, we were able to control the remote streaming console from our trailer to help distribute the operator workload more evenly. Even though we had operators at both consoles, it helps tremendously to be able to quickly make adjustments on the fly to a remote console. Further, being able to see and control the StudioLive using an iPad is key—especially when we’re working with broadcasters and other sound companies. It helps tremendously to be able to see and control our system while standing at someone else’s mix position.”

As the ‘command central’ of any audio production, today’s mixers must be able to manage a significant number of audio channels and have the capability to manipulate that content quickly and easily. As a result of their sophistication, questions inevitably arise, so quality customer and technical support is crucial. Here too, Anderson was very complimentary of PreSonus. “Sometimes in live broadcasts, you encounter a challenge that needs to be solved immediately. Soon is not soon enough. PreSonus’ excellent technical support network provides a crucial safety net for us. We can always get help when we need it. There is no better support in the industry.”

Before shifting his focus to upcoming projects, Anderson offered these parting comments on his experience with the PreSonus StudioLive Series III digital mixing consoles. “The StudioLive 32 was purchased literally the day before we used it on the WUNC job in March 2019. WUNC already had a StudioLive 16 that they purchased for that festival last year. We were able to get the two consoles networked and mixing the morning of the show. It took about ten minutes. That’s a real testament to the ease with which these consoles can be integrated. We have been delighted with the StudioLive Series III ecosystem. The ease of integration and value cannot be beat. In fact, we just expanded our capabilities with the purchase of the brand new StudioLive 64S.”

For information about Mobile Tech Space, Inc., visit the company’s website at https://mobiletechspace.com/.

The information contained herein is, to the best of our knowledge, accurate at the time of publication. The company retains the right to make changes without notice.