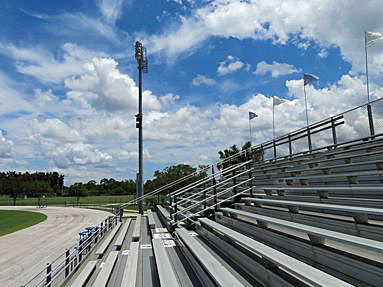 Barry Starkloff, senior electronics technician for The School District of Lee County, is responsible for designing, installing, and maintaining all projects with sound systems, stage lighting, and intercom equipment. Recognizing that sound coverage was inconsistent throughout the athletic fields at both high schools, he ultimately selected PreSonus’ WorxAudio S-XL2 all-in-one weatherized compact line arrays and S-X118S high SPL, weatherized sub bass enclosures to remedy these challenges. He discussed the installations at both locations.

“At Estero High School, we needed a full range sound system for both announcements and music,” Starkloff explained. “At this location, we also needed to cover both the home and visitor sides of the field solely from the home side. We really wanted to have a full range sound system with a subwoofer for low frequency support to use during music playback. School officials didn’t particularly like the sound of traditional announcement horns, and so we were looking for a better solution. Further, since we couldn’t run speaker cable to the visitor side, the system we selected had to be powerful enough to be installed on the home side.”

The solution for Estero High School was addressed by installing a single PreSonus WorxAudio® S-XL2 enclosure on a light pole on each side of the home side bleachers. They also installed a single S-XL2 on the home side light pole and aimed it at the visitor side. The S-XL2 provides broad 160-degree horizontal dispersion and uses two 8-inch, 800W cone drivers and two 1.4-inch exit-diameter horns in a tuned enclosure. For low end support, Starkloff’s crew also added a single S-X118S subwoofer, which incorporates an 18-inch, 700W low-frequency transducer with a 4.0-inch voice coil that provides minimal distortion and smooth, extended low-frequency response.

“As was the case at Estero High School,” Starkloff added, “we also needed a full range sound system for announcements and music at Island Coast High School. The music playback capabilities of the system will be used for halftime presentations and various outdoor ceremonies. In this case, the high school is in the center of a residential neighborhood, so the system’s coverage had to be precise to minimize bleed out to the surrounding homes. School officials received numerous complaints back when we used the old 90-degree speakers.”

To address these challenges at Island Coast High School, Starkloff and his team deployed a single S-XL2 loudspeaker enclosure on a light pole next to the bleacher area. By rotating the enclosure, they were able to achieve a narrow 20-degree wide (Horizontal) pattern, which did a terrific job of limiting coverage to just the bleacher area. The 160-degree pattern—now in the vertical orientation—provides coverage from the bottom bleacher all the way to the top.

When asked about the attributes of the PreSonus WorxAudio loudspeakers that made them ideally suited for these two high school athletic field projects, Starkloff offered the following thoughts. “Speech intelligibility was an important factor with both schools,” he said, “and by using the S-XL2, we achieved the perfect sound quality throughout the stands with very natural sounding speech intelligibility. Using the S-X118S sub was important at Estero High, as they were looking to achieve a full, bottom end for music playback. The staff at both schools were very impressed with the sound quality of the new equipment.”

With the installations at Estero High School and Island Coast High School fully operational, Starkloff reports the new equipment has been very well received. “Estero High has been very happy with new speakers,” he reports. “They used them for their 2016 football season and for their 2017 soccer season. This was first time in years that we did not receive any complaints about the quality of sound. While the Island Coast installation is the newer of the two projects, we expect a similar reaction once the new academic year begins. School officials have been very pleased with the new sound systems. These systems are a major improvement over our previous equipment and I’m confident both schools will benefit significantly from the improved sound quality.”

For information about The School District of Lee County, visit www.leeschools.net.