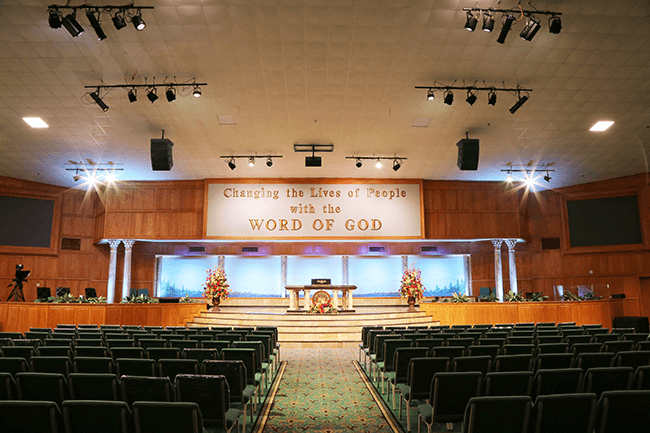 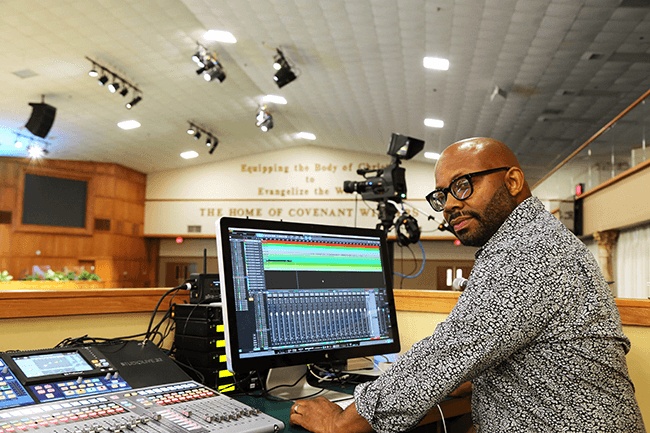 According to Singleton, Word of Life Christian Center’s sanctuary is 100 feet wide by 70 feet deep with a 30 foot high ceiling. The stage faces into the width of the room and seating capacity is approximately 1,200 worshippers. Services are considered modern evangelical and music assumes an integral role. Lindgren added, “Prior to the new system, the space used a collection of outdated point source loudspeakers that were both underpowered and failed to provide consistent coverage throughout the space. Because of this, church management was adamant about the ability of the new SR system to provide even coverage, along with a high level of speech intelligibility and solid music reproduction characteristics. This is what ultimately led to the deployment of the PreSonus equipment.”

To address these challenges, Singleton and his team flew two clusters, each consisting of four WorxAudio XL1i-P line arrays over the left and right front edges of the stage area. For center fill, they flew a WorxAudio X1M. Additionally, there are also two WorxAudio V5 compact line array enclosures positioned one each on the far left and right edges of the stage that serve as side fills.

Two WorxAudio TL218SS super subs provide low frequency support. These enclosures are positioned one each at floor level on the far left and right sides of the stage area. Completing the assortment of loudspeakers, Lindgren and Singleton specified two PreSonus ULT10 2-way point source enclosures. These are used as stage monitors.

When asked about the various attributes that made these various loudspeakers the right choice for this project, Singleton offered the following comments. “The big issue here was with the layout of the sanctuary, which made even coverage and speech intelligibility a huge challenge,” he explained. “The WorxAudio loudspeakers have an extremely wide 160 degree horizontal dispersion pattern that made it far easier to provide consistent coverage throughout the space. They also deliver great clarity and a full, rich musical sound.”

The mixing system and its associated audio management tools are an equally important part of the church’s new SR system. At FOH, mixing tasks are handled by a PreSonus StudioLive 32 40-input digital console with motorized faders. This mixer serves as the core of the PreSonus AVB networking setup that, in this case, also includes two EarMix 16M personal monitor mixers, an SW5E 5-port AVB switch, one each NSB 16.8 and NSB 8.8 AVB-networked stage boxes, plus two HP2 headphone amplifiers. “The beauty of this entire system is that it all revolves around PreSonus technology,” explained Singleton. “From input to mixing, to processing and all the way to final output—it’s all PreSonus and it works beautifully.”

The Word of Life Christian Center project was completed in July 2018 and since that time, Lindgren and Singleton report they have received numerous compliments. “The clarity in the sanctuary is light-years above what it had been,” says Lindgren. “The smiles I saw on their faces were a delight to behold.” Singleton seconded Lindgren’s enthusiasm, “Their satisfaction is 100% and they told me, ‘We are in audio bliss!’ They are totally happy with the installation and everything related to the PreSonus gear they purchased. It’s really been a very gratifying experience for everyone involved.”